What is a Surge Protection Device?

Surge protection is essential for solar panels to endure their authorized lifespan due to their big, exposed location. Lightning strikes easily destroy the PV equipment’s sensitive components. Surges can quickly harm electrical equipment to the extent that catastrophic failure can happen. Inverters are quite expensive, but the downtime cost and loss in industrial applications is considerably costlier. To safeguard high energy from passing through electronics and generating high voltage Damascus, all conductive tops must be grounded directly, and all wire that passes through the system (like Ethernet cables, ac mains, and many more) must be linked to the ground using an SPD (surge protection device).

You can also utilize Solar DC Surge Protector to protect the installation’s sensitive electronic equipment, such as computers, televisions, washing machines, and safety circuits like fire detection systems and emergency lighting. Transient over-voltages can cause harm to equipment with sensitive electronic circuitry.

How can a Surge Impact The Systems?

The impacts of a surge can cause either immediate failure or long-term harm to equipment. Therefore, SPD for Solar systems is often put within the consumer unit to safeguard the electrical installation. Still, other surge protection device type is available to protect the installation from other incoming services. These services include telephone lines and cable TV. It’s vital to realize that only securing the electrical installation and not the other services could allow transient voltages to infiltrate the system through another channel.

At the source, such as the main distribution board, you install a Type 1 SPD.

At sub-distribution boards, you can place the Type 2 SPDs.

(Combination Type 1 and 2 SPDs are available and people commonly use it in consumer units.)

Close to the protected load, you can fix a Type 3 SPD. You can use the solar energy system in conjunction with Type 2 SPD. Also, there must be coordination between multiple devices to ensure proper operation when multiple devices are required to protect the installation.

GEYA ELECTRICAL is one of the top electrical manufacturing companies in China. All Surge Protection Device produced by GEYA will be carried out in strict accordance with the production process and international regulations. GEYA has a detailed archive to ensure that there is no error in Surge Protection Device’ development, production, acceptance, and sales. 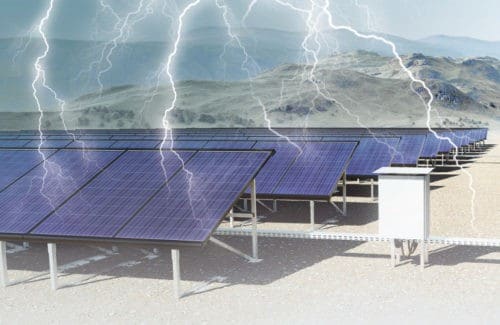 The Photovoltaic system has distinct characteristics that need the usage of SPDs designed specifically for PV systems.

These PV systems utilize high system voltages that go to about 1500 volts. The maximum power point is only a fraction of percentiles that are below the system’s circuit current. To choose the right SPD model for your PV system, you’ll need to know the following:

When installing an SPD device, you must know the protection an external lightning protection system (LPS) gives. The LPS’ specified class determines whether an isolated and non-isolated separation distance separates the LPS and PV installation. The voltage protection level must be 20% lesser than the terminal equipment’s dielectric strength to have a protective effect. It’s critical to utilize an SPD device to withstand the current that might be greater than the solar array string’s short circuit current.

Risk assessment is a time-consuming and difficult process. Consider which places are most vulnerable and which are least vulnerable as a starting point. The sort of SPD best suited to the type of building you’re planning to safeguard – if it has a single service entry switchboard – can then be considered. Lightning strikes about 90% of the earth. The places with the most lightning are on land in the tropics. The Arctic and Antarctic have essentially no lightning, followed by the oceans, which have only 0.1 to 1 strike/km2/yr. Even if the density of strikes (Ng) does not appear to be a problem, many countries, such as France, include Ng in their national standard NF C 15-100.

Although SPDs do not trip, the following events are likely to end their lives:

Even though you may have to choose an external circuit breaker, more and more manufacturers include them in the same enclosure.

You must consider the short circuit current of the building where the SPD is installed while selecting a circuit breaker. A disconnection circuit breaker with a short-circuit breaking current of less than 6kA, for example, is appropriate for a domestic structure. However, it is normally 15kA or 20kA for an office.

Choosing the right surge protection device for solar applications can be a daunting task. This article is designed to help you understand what SPDs are, how they work and why they are necessary for photovoltaic systems.  The most important thing to remember when selecting an appropriate model of the surge protection device is that it is not just about protecting your system from voltage surges or power spikes; it’s also about preventing damage by overvoltages (which occur at levels above those capable of causing a voltage spike). If you are unsure about any aspect of this process, or if you just want help choosing the perfect SPD model, contact us today so we can provide all-inclusive guidance on how to find one that fits your needs perfectly.

Zhejiang Geya Electrical is a renowned manufacturer and provider of circuit and automation products in China. Since its inception in 2007, the company has grown to include four regional offices across six continents and more than 40 worldwide clients. With an annual turnover rate of more than 10 million dollars, the company continues to expand. And Geya possessed many international certifications for management and products, like ISO, CB, KEMA, CCC, ROHS, CE etc.