Looking for the top proximity sensor producers you can trust? For your business, we have gathered the Best Proximity Sensor firms from around the globe in this post, together with a selection of their unique sensors. In this reference, the types and operating principles of the available sensors are explained in great detail. Continue reading! 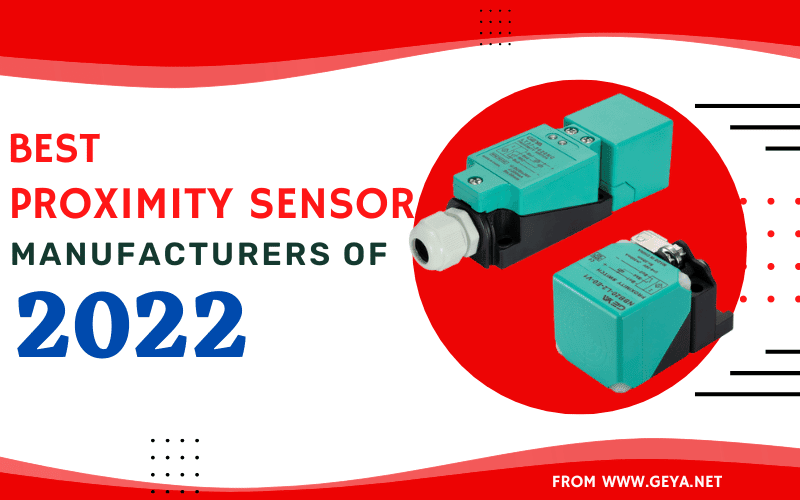 Proximity sensors are available in types that detect ferrous and non-ferrous metal items using high-frequency oscillation and non-metal objects utilizing capacitive models. These proximity sensors come with environmental resistance, heat resistance, chemical resistance, and water resistance.
This sensor’s primary function is to detect the object without coming into contact with it. The term “normal range” refers to the farthest distance that this sensor can detect. Instead of using IR radiation to create a light beam, this type of sensor creates an electromagnetic field. An overview of proximity sensors and how they function is covered in this article.
Best Proximity Sensor Manufacturers of 2022

The Proximity Sensor Market was estimated to be worth USD 3790.5 million in 2020 and is anticipated to rise at a CAGR of 7.3% over the forecast period to reach USD 5761.12 million by 2026. (2021 – 2026). Without making direct contact, the proximity sensor may detect the presence of items nearby. This sensor generates or radiates a beam of electromagnetic radiation, typically in the form of infrared light, for the purpose of sensing things. It then detects the reflection to determine the object’s proximity to or distance from the sensor. 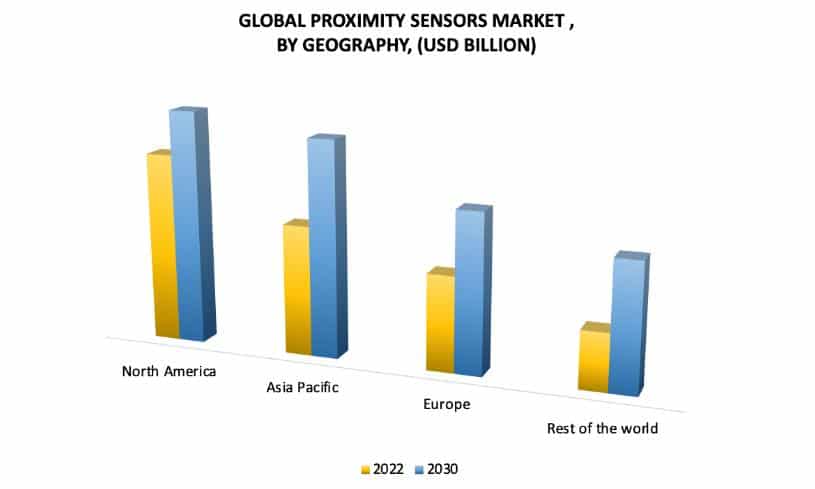 List of Proximity Sensor Manufacturers in the Global Market 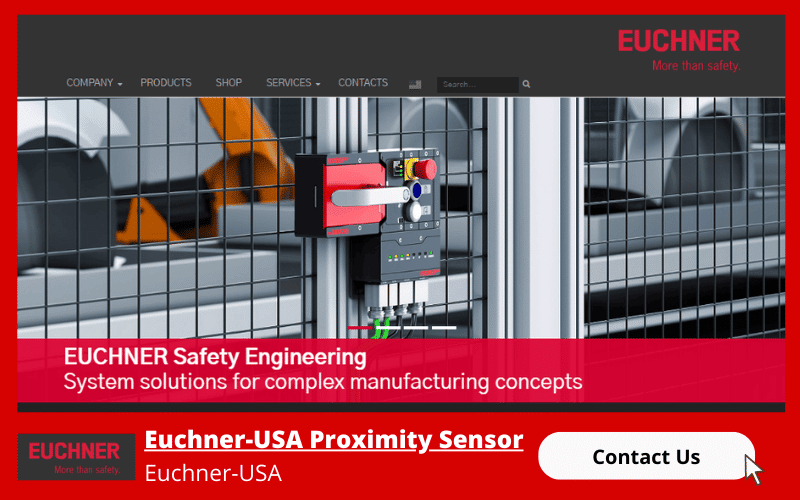 The company was founded in France and sells its products all over the world. It is manufactured in large quantities, such as switch socket fan regulator distribution board MCB, and so on.

Which is ranked second in terms of switch sockets but first in terms of MCBs. It is the No. 1 brand in India due to the trust and positive response of many customers, as well as its trustworthy services. 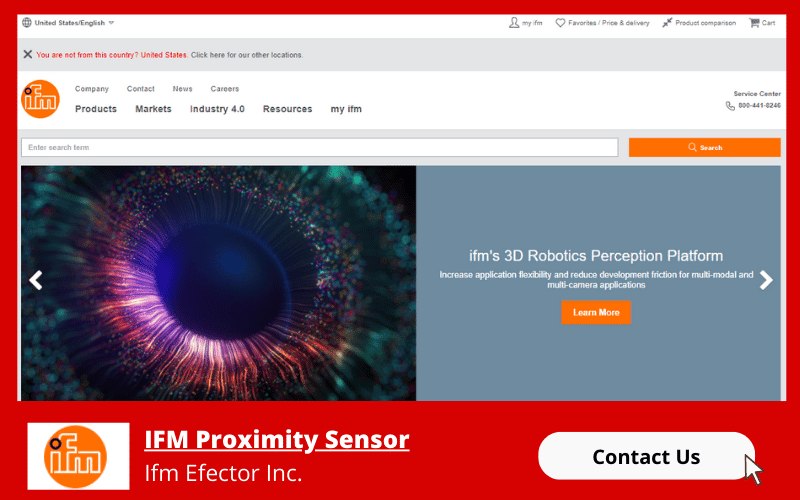 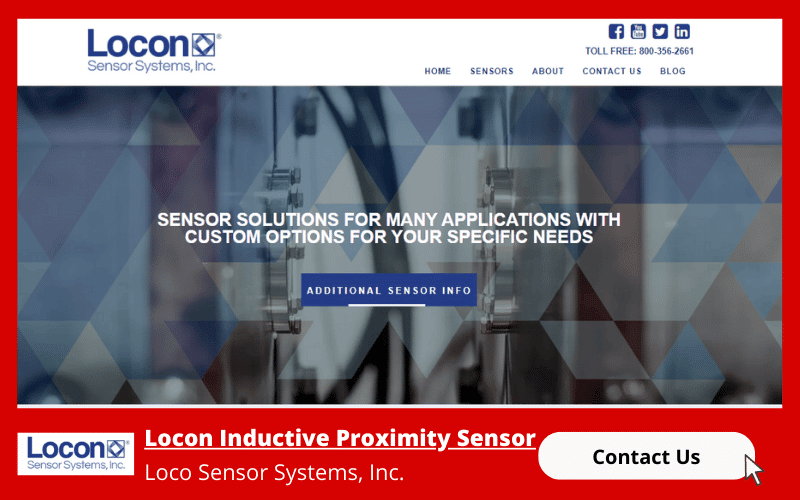 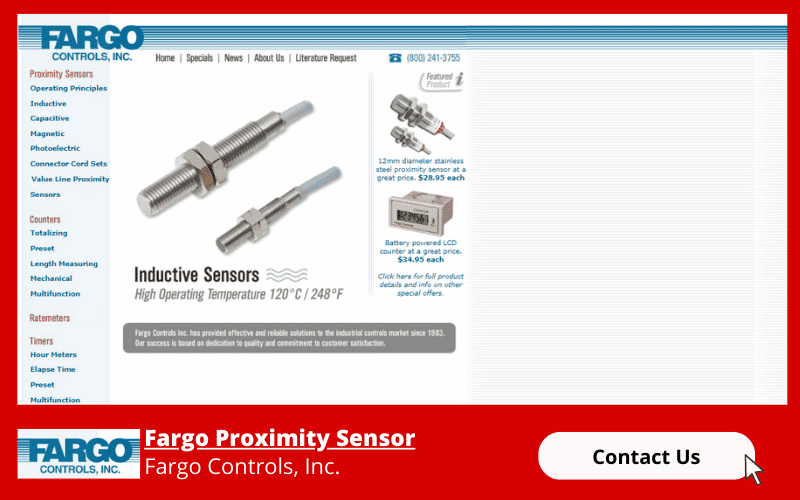 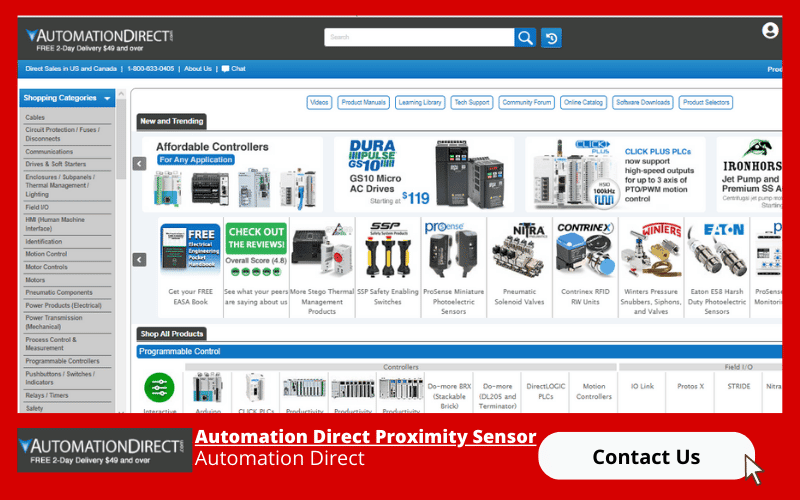 Inductive, magnetic, and capacitive proximity position sensors are available from this distributor. There are several sizes available. Stainless steel or polybutylene terephthalate housings, cylinder and rectangular designs, mechanical stability, and flush or non-flush installation are among the features that vary by model. Detects metallic, non-metal, and non-contact objects. AutoCAD files are welcome. 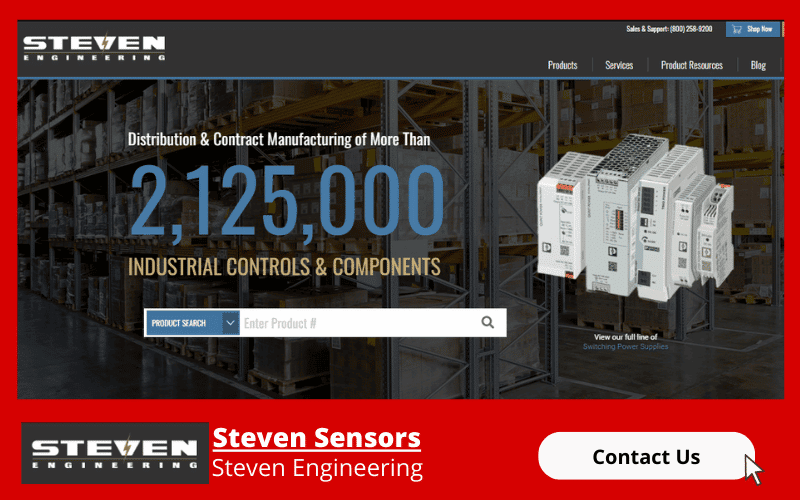 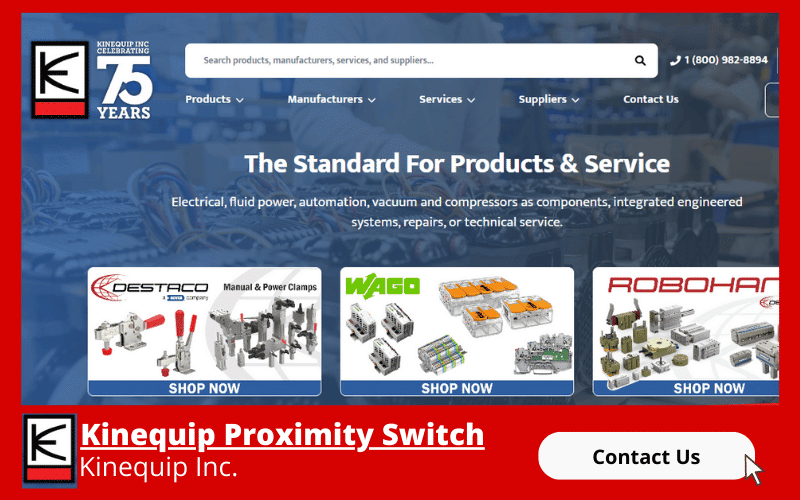 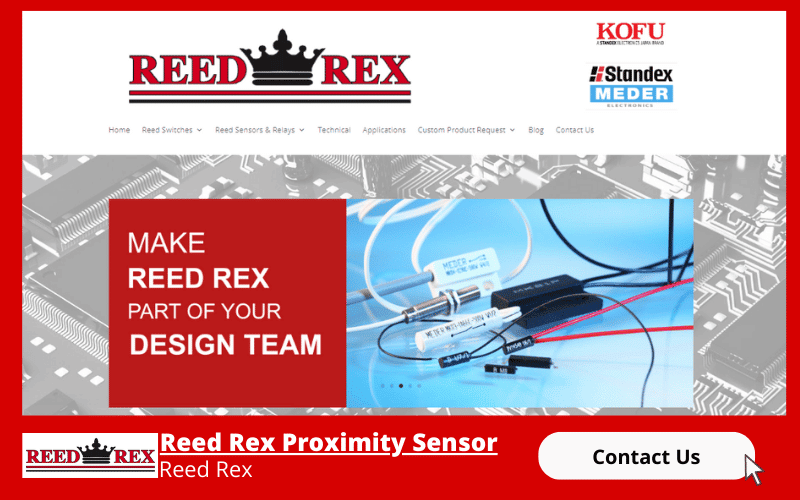 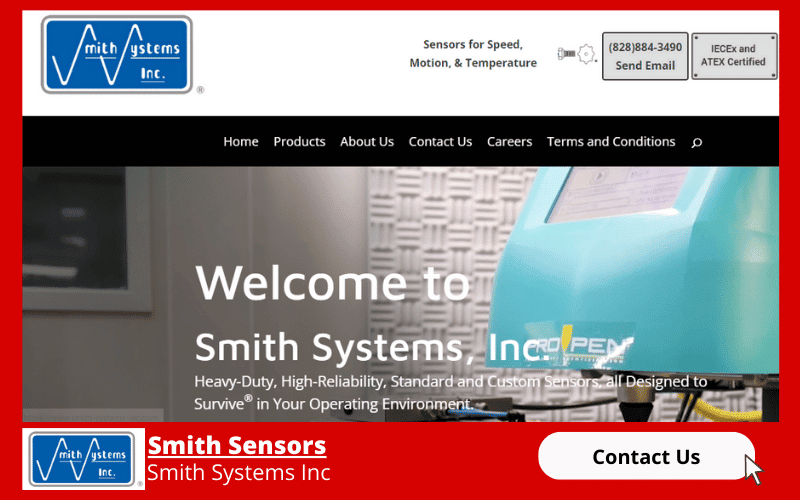 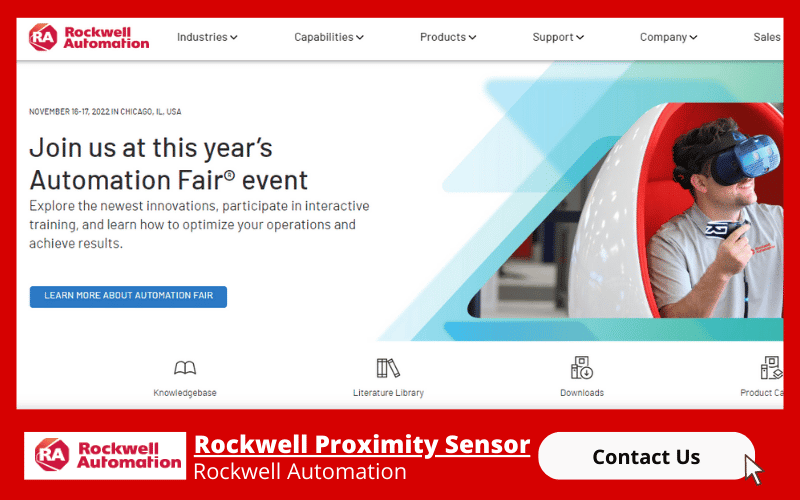 What is a Proximity Sensor?

What are Proximity Switches? 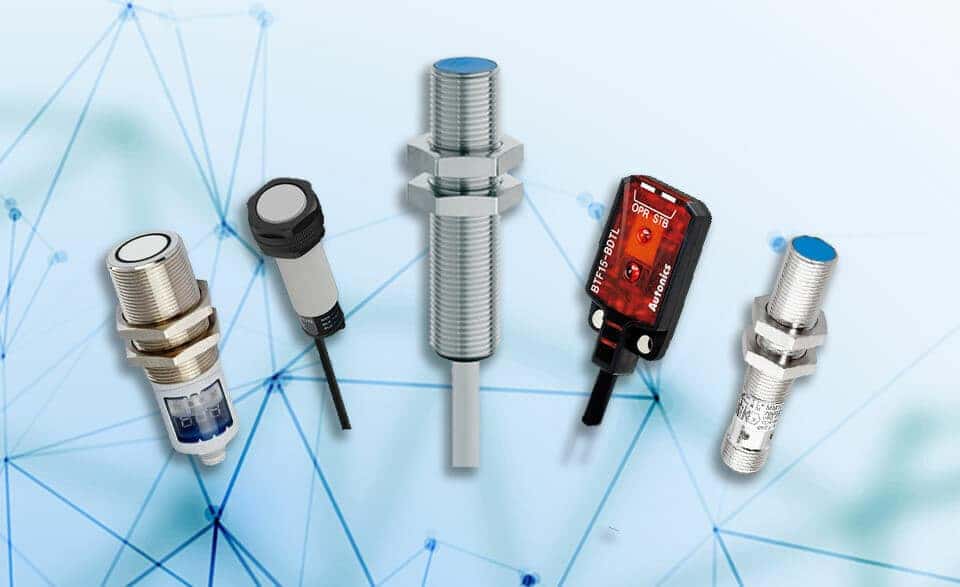 We’ll look at the proximity sensor’s features to better understand what it’s all about. It has the following features:

Since proximity sensors do not physically touch the object they are detecting, the object is not scratched or otherwise harmed. Proximity Sensors are able to detect the presence of an object electrically, without touching it, unlike devices like limit switches that detect an object by making contact with it.

Proximity sensors are virtually completely unaffected by an object’s surface color because they detect physical changes in an object.

Suitability for a Wide Range of Applications

In contrast to typical optical detection, proximity sensors may be used in moist environments and throughout a wide variety of temperatures. They work in a temperature range of -40 to 200 °C.

Phones with Android or iOS operating systems can also use proximity sensors. It uses basic IR technology to turn the display on and off depending on your needs. For instance, it disables your display when you’re using the phone so you won’t unintentionally activate anything while holding it up to your cheeks!

Since a proximity sensor relies on semiconductor outputs, its operation is not reliant on moving parts. As a result, it often has a longer service life than standard sensors.

Proximity sensors give a faster reaction rate when compared to switches, where touch is necessary for detecting.

Proximity Sensors, in contrast to optical detection techniques, can be employed in environments with water or oil use. Dirt, grease, or water on the object being detected have almost no impact on the detection process. There are various models with fluororesin casings for good chemical resistance.

Signal and power lines are integrated. Internal components could be harmed if only the power line is wired. Always add a load.

When a target enters the field of a non-contact sensor like a proximity sensor, the sensor senses the target’s presence. Depending on the type of sensor, a target can be detected via electromagnetic, infrared, or sound waves. These sensors are used in self-driving automobiles, assembly lines, anti-aircraft systems, recycling facilities, and cell phones. There are various types of proximity sensors available, and they all detect targets differently. 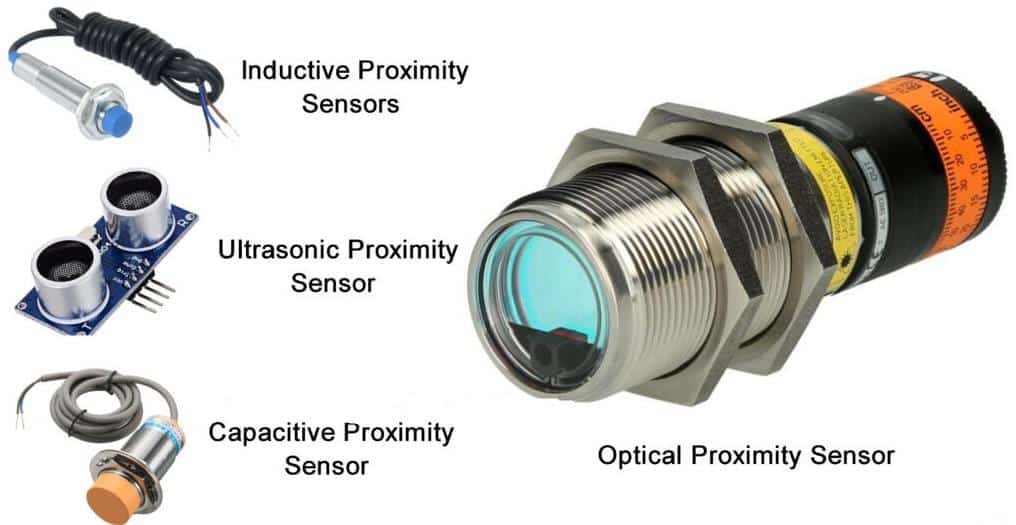 These sensors for metal detection are non-contact devices. The induction law is largely what drives this type of sensor. When a metallic object comes close to it, the oscillator is driven through the coil. This sensor comes in two variations and contains four crucial parts, which are covered in more detail below.
Unshielded and shielded inductive proximity sensors are available.

In the shielded version, the sensor coil sides are covered, concentrating the electromagnetic field created in the face.

The generated electromagnetic field through the sensor coil is clear in the unshielded form, allowing for longer and wider detecting distances. There are four main parts to an inductive proximity sensor: an oscillator, a coil, a Schmitt trigger, and an output switching circuit.

An electromagnetic detecting field can be produced when the sensor coil is given an AC. Eddy currents can arise when a metal object is positioned close to the magnetic field, changing the coil’s inductance. When the coil’s inductance changes, the circuit adjusts the sensor’s output switch, which is continuously monitoring.

Here, these sensors constantly oscillate in the absence of a target, and only when a target is present will the switch be activated. The inductive proximity sensor is mostly utilized in industrial and security applications such as metal object identification, the detection of landmines, the creation of automated machines, etc.

These contactless sensors are used to detect both metallic and non-metallic items, such as powders, liquids, granular materials, etc. This sensor detects changes in capacitance to function.
It has an oscillator, switching circuit for the output, and a Schmitt trigger, just like the inductive kind.

The key distinction is that it has two charging plates, one for capacitance that is inside and one that is exterior. The connection between these two plates can be made by using the external plate as the detecting surface and connecting the inside plate to the oscillator.

There is an electrostatic field created by this type of proximity sensor. When an object enters the detecting zone, the plates’ capacitance rises as well, increasing the oscillator’s amplitude gain. The sensor’s output switch is turned on by this gain. These sensors only begin to oscillate when the target is nearby.
Among the uses for capacitive proximity sensors include industrial operations, moisture management, touch applications, and others.

These sensors are a particular type of proximity sensor that is applied in a number of manufacturing and automation applications. This sensor’s primary functions are object detection and distance measuring. These sensors are employed in the preparation of food, drinks, and various packaging applications.

These sensors have a frequency range that is about 20 kHz higher than the human hearing range. This sensor’s fundamental working principle is to send an ultrasonic signal and receive a signal in return. The target’s distance can be calculated using the time difference between these signals.

Even while they can also be installed in separate units, such as with some photoelectric sensors through separate detectors and emitters, a typical design includes both the transmitter and the receiver within the same physical enclosure. The amount of wiring and installation can be reduced by placing the transmitter and receiver inside the same unit.

Since these sensors detect sound rather than light, they can be used in situations where optical sensors cannot, such as detecting plain plastic labels and items or highly reflective surfaces. Additionally, they are resistant to common pollutants including dust, moisture, and ambient light.

Generally speaking, these sensors are less expensive than inductive and capacitive varieties. These may be arranged into small spaces, making them useful in automated systems. They are also known as light beam sensors.

A sensor and a light source are both present in an optical proximity sensor. While a light source produces light, a sensor is employed to detect it. The photodiode-like semiconductor used as the light sensor in this sensor typically produces less light after being illuminated by light.

The magnetic proximity sensor merely uses mechanical principles to detect the magnetic field. They locate magnetic targets by detecting their magnetic fields, which serve as indicators of their presence. It starts the switching process once it is within the sensor’s detecting range.

These sensors are mostly employed for non-contact location detection outside of the normal inductive sensor ranges. This sensor uses Hall Effect sensors in lieu of GMR inductive, reed switches, magnetoresistive, and variable reluctance as its operating principles.

Proximity sensors can be used in a variety of settings and for a wide range of applications. They are useful in any application where an object must be detected within a specific range. This may include: