Circuit breakers are necessary, and many experts need them to prevent circuit fire caused by short circuit current.

In contrast, surge protectors protect the appliances from a voltage spike. They are optional, but experts do recommend preventing strikes.

Difference between amps and volts:

While the wires can handle a certain level of amps, appliances handle a significant amount of volts.

The job of a circuit breaker is to prevent circuit fire caused by a short circuit current.

The fire is most likely to occur when there’s too much current flowing through the wires, leading to overheating and later a fire. This is because wires can only handle a certain amount of electric current. Many causes lead to overheating wires, such as a short circuit, too many appliances relying on one circuit, grounded circuit, etc., which is why surge protector breakers are necessary.

Similarly, appliances can also handle a certain amount of volts. When it exceeds, it leads to a power surge that causes damage.

A variety of factors can cause power surges. Some include electrical storms, faulty wiring, power outage, bad electrical components, large appliances in use, etc. For this reason, experts mostly recommend using a surge protector device that protects the device mostly during voltage spikes. In addition, you can install a whole-home surge protector in the box of the electric circuit breaker or at the main point of entry. It protects the appliances by detecting high voltage spikes and diverting the excessive current through the grounding path safely. You can buy these circuit breakers from the best circuit breaker manufacturer to ensure you get the quality you need.

Benefits of having a Surge Protector’s Dedicated Breaker:

If there is over-voltage, it can damage the appliance. However, over-voltage will not cause any fire if a circuit breaker is powering it. Surge protectors are simply protecting to limit these surge spikes for a few minutes.

Circuit breakers protect from overcurrent, which can even burn down the house, and this may even happen without overvoltage.

Hence, both circuit breakers and surge protectors are working on protecting different events. If a circuit is tripping, it is usually because there’s much load on the same.

Type of breakers with surge protectors

In conclusion, circuit breakers that have type D time-current have outperformed the standard breakers. Even though they have a higher price, the high capacity of surge currents does the performance in even critical applications.

A 100A breaker will lead to higher costs, increased wire costs, and more time for installation. The larger breaker may not coordinate properly with the central lug. A fault found in the protector can also lead to the panel’s breaker tripping.

On the other hand, an AC Contactor helps in controlling the flow of electricity throughout the unit. It is one of the most common low power voltage appliances produced by GEYA. It is used in controlling motor frequently and is an important element in connecting and breaking lines.

Under the extensive range of circuit breakers, GEYA also provides surge protection devices that are a part of the electrical protection system. It is connected parallel to the supply circuit of the load that it needs to be protecting. 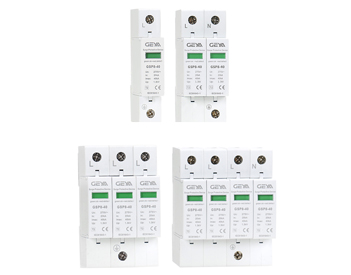 The function of the surge protection device:

The surge protection device is cost-effective and provides a solution to improve the system and eliminate any damage caused by surges. It is highly suitable for any facility. It can be used anywhere in the house for protection. These are installed on circuit breakers and automatic transfer switch for portable generator in residential homes and other places like pad-mounted transformers.

All the devices produced by GEYA are carried out in strict accordance with the production process. Therefore, they ensure that there are no errors in the development and sales.

GEYA has always proved to provide sustainable solutions that help the customers, and their products are highly efficient and reliable.

GEYA molded case circuit breaker has insulation voltage of 1000V, which is a perfect choice for distributing applications, mainly for places with higher requests for protection against short circuit overloading and under-voltage, as this will help maintain the supply reliability. Also, with the robust structure of the molded case CB, it can withstand the environment of humidity and even oil.